A few months ago, I was talking with a friend about Universal Darwism and the power of genetics, and without hesitation she asked, “Well, what about homosexuality? Surely that would have been removed from the gene pool centuries ago?”. As the evolutionary pragmatist, I completely agreed with her. If being gay was indeed nature over nurture, it would have been removed from the gene pool millenia ago, but the liberal in me felt that homosexuality must be genetic (as opposed to a life choice etc.). This conflict (along with the obvious observation that homosexuality is still pervasive in society) had me utterly stumped.

Let’s tackle the problem of evolving homosexuality out of the gene pool first — why did I believe that homosexuality should have been breed out? Imagine two groups, Group A, which makes up 99.9% of the population and Group B, which makes up the remaining 0.1%. Now imagine that Group B is a mere 1% more efficient at reproducing than Group A. The chart below shows how the two populations would progress (as a percentage of the total population) if Group A had 2 children each and Group B at 2.02 (1% more). 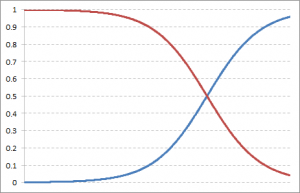 So could homosexual behaviour be kin selection at work? Do gay men and women provide additional care to their kin, therefore increasing the likelihood of them surviving? The answer is unclear — in Western society, there is no meaningful difference between homosexual and heterosexual behaviour here, but in some cultures this behaviour is certainly seen. For example, in Samoa, they treat effeminate men as a third gender — fa’afafine — who are known for their dedication to family.

Sickle-cell anaemia (SCA) is a genetic blood disorder that reduces a red blood cell’s ability to functional optimally, causing greatly reduced life expectancy and, in some severe cases, death. As a genetic defect, evolution should have long selected this gene out of the worldwide population. However, there is an interesting side effect. If a person receives the defective gene from both the mother and their father (homozygotic), they will develop SCA. However if they receive one defective and one healthy allele (heterozygotic), they become a carrier — able to pass on the disease but not exhibit full-blown symptoms. As such, a carrier will produce some sickled cells but enough to remain healthy. Furthermore, these sickled cells provide a key benefit to the carrier — a greatly increased resistance to malaria! This is the heterozygote advantage.