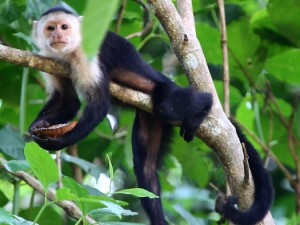 One area that was especially interesting was the concept of justice. It turns out that humans aren’t the only species that have a concept of justice. In 2003, scientists proved that capuchin monkeys would protest if they saw another monkey “paid” more than them for the same task. This scenario was created by training the monkeys to swap stones for cucumber (the pay). Then scientists then arbitrarily chose one of the monkeys to receive a grape instead of cucumber. The other monkeys would grow indignant, sometimes refusing to take their cucumber, other times taking it and refusing to eat it, other times refusing to continue working (bringing stones).

With humans, there is a slightly more interesting game to play called The Ultimatum Game. Imagine you and a partner are given £10, one of you (Person A) is in charge of deciding how to split the money (£9/£1 etc.), with the other one (Person B) choosing whether to accept or reject the proposal. If the deal is rejected, both parties walk away with no money at all.

Now, a purely logical approach would be for Person A to take as much as possible and Person B to always accept the offer, as they’ll be at the very least slightly richer than they were before the experiment started! However, when tested, it was found that people would actively punish overt greed, choosing to not receive any money than reward greed on the part of their partner. Furthermore, the partner would predict this behaviour and propose a reasonably “fair” split — in fact, the most common proposal was simply 50:50.

Adding a twist, scientists re-ran the experiment but this time got the participants to take a meaningless test, only to subsequently tell them that whoever scored better on the test would be the one chosen to split the money. In this scenario, scientists found that the behaviour of both subjects changed quiet radically. Person A would radically increase their share and Person B would virtually always accept. The mere fact that one thought the other deserved their position of authority greatly reduced their own sense of injustice at receiving less money.

All this made me think about the furore around bankers’ pay with the very recent news around Royal Bank of Scotland CEO Stephen Hesters’ bonus pay. Looking further back, even this seems to pale in comparison to the 2004 scandal involving Richard Grasso, the ex-CEO of the New York Stock Exchange. Grasso was forced out of office after it was revealed his annual package was $190 million—quite substantial for a supposedly non-profit organization.

In both instances though, the packages had been approved either by the government (the taxpayer-owned RBS) or by the Board of Directors (for the then privately-owned NYSE). It seems that what illicted such a strong response from the public was the very same sense of injustice that the capuchins felt when they saw the grapes being handed out. Most people see the huge bonuses that bankers are being paid as part of the gratutious culture that pervades banking—but accept it as a necessary evil to keep the gears of capitalism greased. However, when their performance was seen as inadequate, inappropriate or (in Grasso’s case) completely disproportiate, we collectively throw down our cucumber!

Put in the Ultimatum Game terms, if we feel that the other party has passed a test that qualifies them for a larger share of the money, then we get on with our lives (albeit a little begrudgingly!). However, if the smoke of the experiment clears and we realize that the person on the other side of the table is no smarter, brighter or more deserving of the share of wealth, we will actively punish overt greed.

As with any organizational behaviour, we will need to be careful that our collective sense of injustice doesn’t turn into a pack mentality, but I found the parallels between our little capuchin cousins and recent news events worthy of sharing with you all.

Let me know what you think.